The Titans traveled with less than a full compliment of soldiers to Zama High School where the Trojans hosted the Zama Invitational.

It was yet again a close battle between St. Mary’s and Kinnick, and yet again the Titans came out on top.  With 4 individual champions, 6 silvers and 3 bronze medalists (and 2 open weight classes), St. Mary’s edged Kinnick 87 points to 81 points – continuing their tournament  and dual winning streak since the new year.  Although they were close in team points, the Zama Invitational had no limit on the wrestlers competing in the weight class but only the highest placing wrestler scored team points.  In the 11 weight classes that Kinnick and St. Mary’s both competed in 13 Titans placed in the top 3 versus Kinnick’s 8.  Captains Chang Young Lee and Ryo Osawa breezed through the tournament as usual; both remain undefeated and hardly even scored on this season.  It became a memorable day for juniors Tatsuhito Matsumoto 115lb and Alex Patton 180lb as they both won their first tournament title and qualified for the Wall of Fame of wrestling (currently taken down due to the completion of the new MPH and  being considered for a new location).  They  both grabbed their championship title with style: defeating a Far East runnerup(115lb) and a defending Far East champion (180lb) in the finals, both of whom Tatsuhito and Alex lost to a week before. Congratulations to both wrestlers.

101 lb (4 man round robin) – Our 101 Beast from last week just missed taking first place two weeks in a row.  Eshan had a good first round match and then got himself tangled up once too often with Yokota’s 101 pounder and ended up second in this tight three man round robin.  Eshan should regroup, get back to basics and back to the winner’s podium next week at Kinnick. 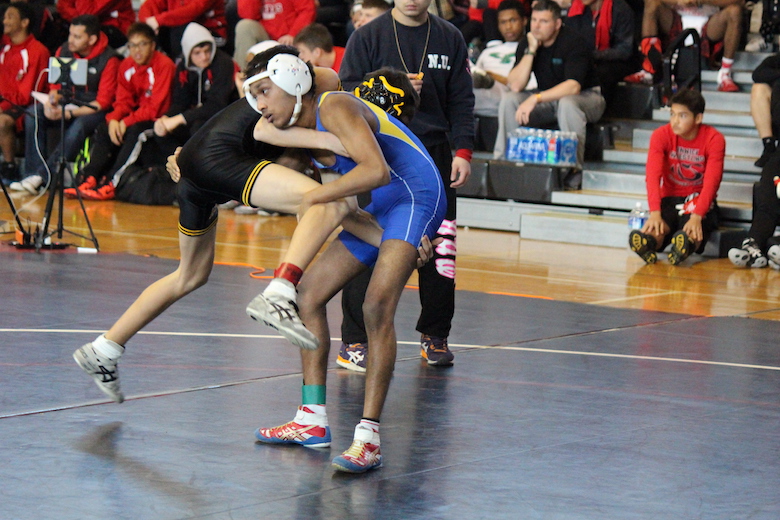 115lb (pool and championship bracket) – The Titans fielded two wrestlers in this weight class, Tatsu (Junior) and William (Freshman).  Tatsu got through his pool matches undefeated to move into the Championship bracket.  William won his third pool match by fall to earn his spot in the championship bracket.  Unfortunately for St. Mary’s, our two wrestlers faced each other in the semi-finals where Tatsu prevailed by tech fall.  William went on to lose the 3rd place match to his CAJ opponent and Tatsu went on to defeat his Kinnick rival in the finals to bring home the gold!

122lb (pool and championship bracket) – The Titans put two wrestlers into the Championship bracket for this weight class as well.  Kai wrestled well through his pool matches and then came up short against Kinnick’s 122 in the semi-finals but recovered nicely with a win to take  3rd place.  Rio blasted his way through his pool matches and his semi-final match to set-up another show-down with his Kinnick rival.  This was a hard fought match from the first whistle with both wrestlers trading advantage in both score and position over the other.  Rio looked to be in a position to be pinned and then escaped and reversed on his Kinnick opponent holding him in a pin position twice but never getting the call from the official before his opponent escaped and took Rio down with a pin!  By far one of the best matches of the day. 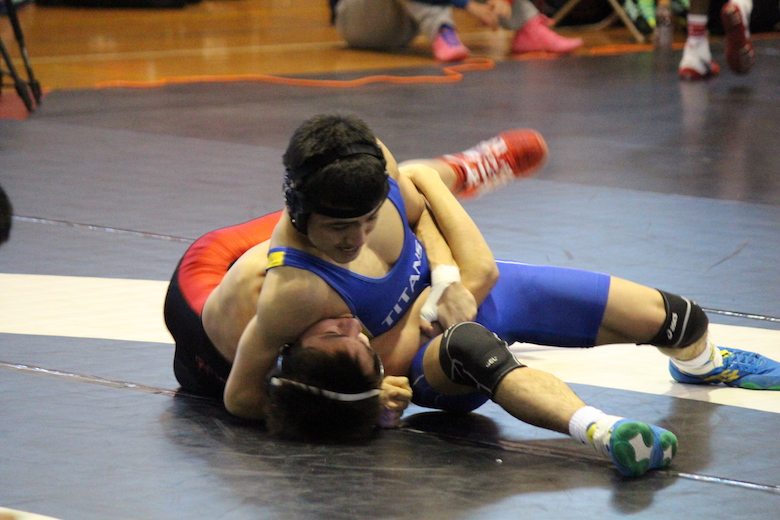 129lb (pool and championship bracket) – Tatsuo and Dai both looked good throughout their pool matches and then this bracket ended up with one of the more interesting pairings of the day as St. Mary’s faced-off in one semi-final while two Kinnick wrestlers faced-off in the other.  Tatsuo prevailed over Dai who defeated his Kinnick opponent to take 3rd place.  Tatsuo did not do as well against his Kinnick rival and took Silver.  A great outcome for St. Mary’s in this bracket as it’s clear we have some depth here.

135lb (pool and championship bracket) – Co-Captain Chang Young Lee made short work of everyone that stood in front of him once again and remains unbeaten for the season.  This is a weight class that St. Mary’s has a number of wrestlers in and a couple also did well in this tournament.  Sophomore Cole Lawlor made it to the semi-finals where he, unfortunately, faced-off against Chang Young and then lost his 3rd place match to his ASIJ opponent.  Also in this weight class, Junior Jonathan Goff recorded his first tournament win by pin.

141lb (pool and championship bracket) – Co-Captain Ryo Osawa continued his unbeaten season as well by capturing gold for the Titans.  Ryo trampled his opponents throughout the pool matches and then dominated the championship bracket.  He lives the Titan’s motto: Show Up – Dominate – Go Home

148lb (pool and championship bracket) – Jihoon did a fantastic job working his way through the pool matches to earn a spot in the championship bracket.  He beat his CAJ opponent in the semi-finals where he faced-off against Zama.  Jihoon wrestled a good match and its clear that with a bit more experience he will become a tough contender in this weight class. 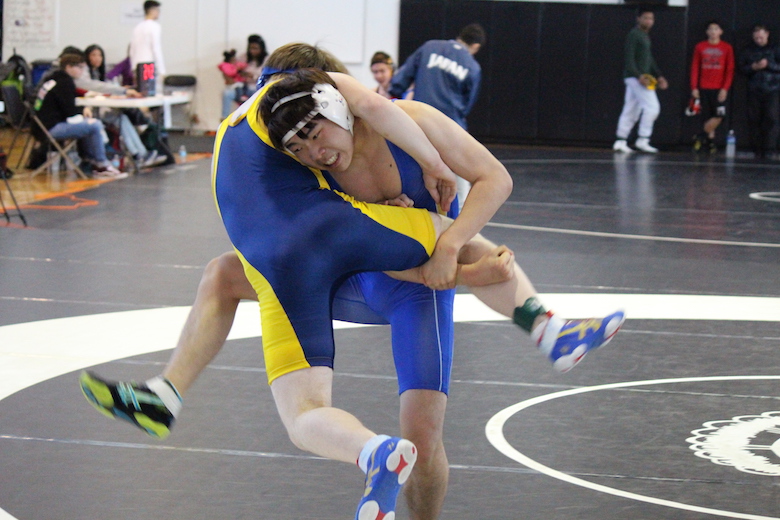 158lb (pool and championship bracket) – Austin and Gregory both wrestled well through their pool matches and then both drew tough matches in the semi-finals of the championship bracket.  Once again, Austin faced his rival from CAJ and for most of their match it appeared Austin may have figured out the key to beating him but came up just a bit short once again.  Gregory went head-to-head with a Kinnick opponent that proved to be too much for him sending both Titans to face-off for 3rd place.

168lb (pool and championship bracket) – Mitchell had little trouble with his pool matches and then faced a Zama opponent in the semi-finals that he also beat, setting the table for yet another final match against his CAJ rival.  This time Mitchell came up short and lost by tech fall.  Mitchell only has two loses so far this season and they are both at the hands of CAJ.

180lb (pool and championship bracket) – Alex may not have won The Beast last week, but he wrestled like one throughout the day and found himself face-to-face with his Kinnick rival for the 3rd time this season.  After losing a 4-2 decision to his opponent the week before, Alex got back to basics and wrestled a controlled match until he found his opening and drove his rival to the mat to win by pin!  As long as Alex sticks to his basics and does not put himself in unfamiliar positions the Titans have a serious threat in the 180 lb bracket this season.

215lb (pool and championship bracket) – Shane continued his undefeated season right up to the finals match where he dropped one to his Edgren opponent.  Shane wrestled a solid tournament and continues taking the big head throws every time an opponent gives it to him.  With only 1 loss on the season, Shane remains a force within the Kanto League. 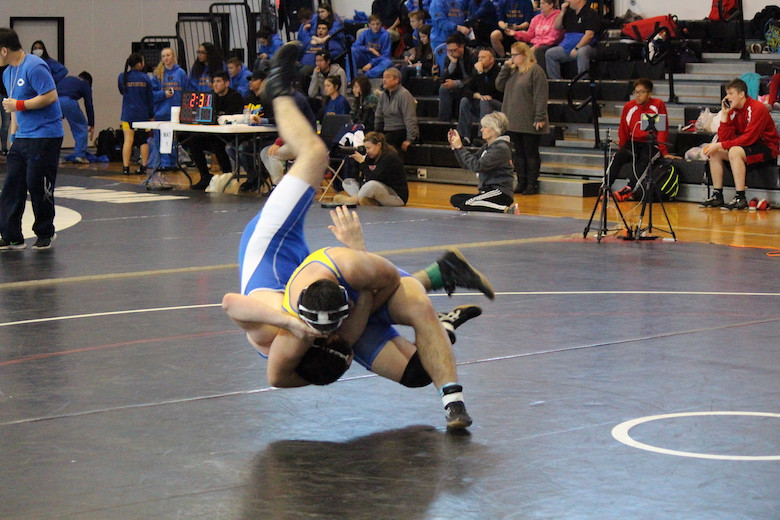