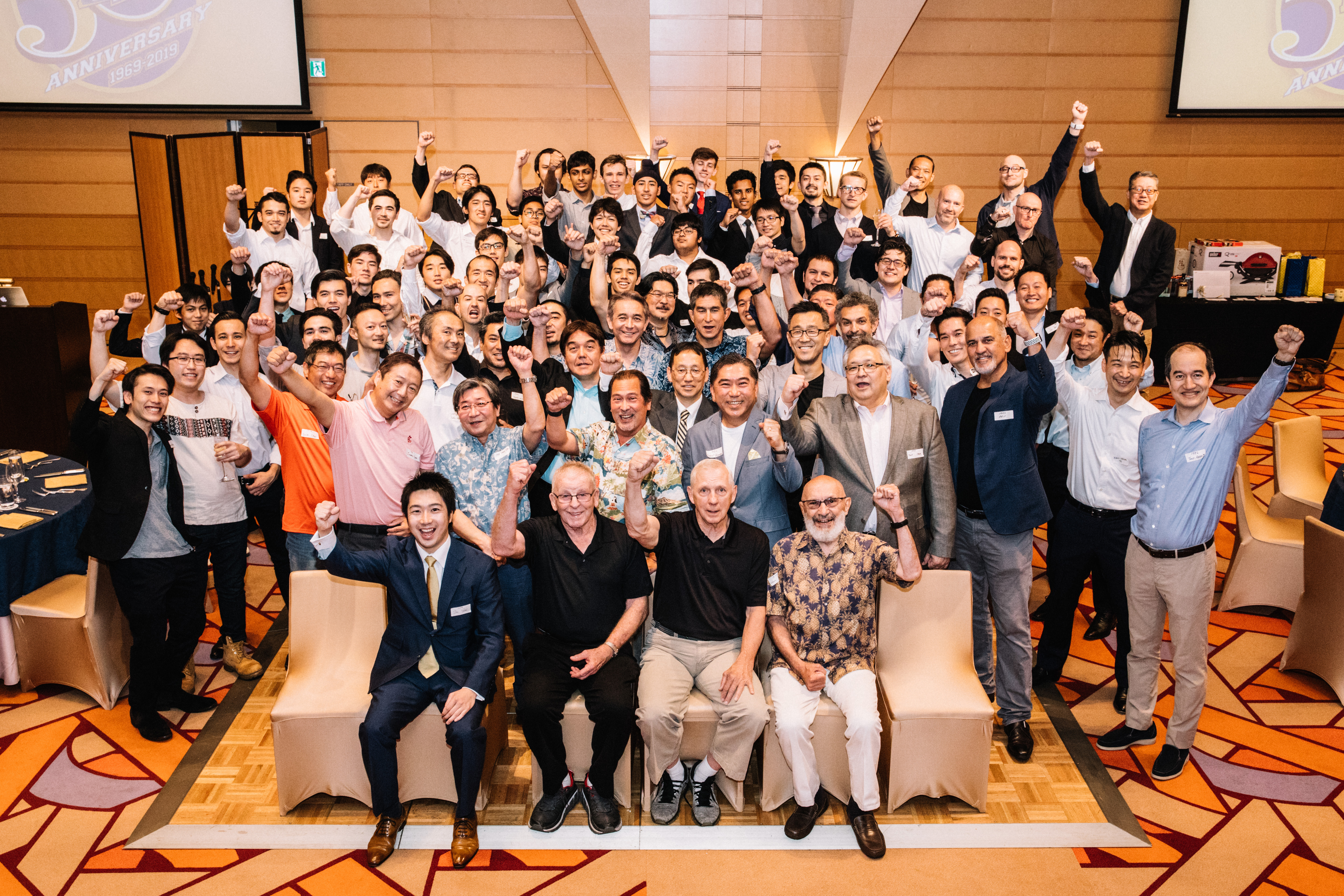 Over 130 Titan wrestling families gathered for perhaps one of the most beautiful and special events on June 8, 2019 at the Tokyo American Club. Though the occasion was to commemorate the 50th anniversary of the St. Mary’s wrestling program, it was far more significant than a simple numerical milestone. It was an evening where attendees got to relive their most precious moments of life, reunite with their comrades, and reaffirm their journey of life till today. Many wrestlers from the early 70’s till the present day attended and several wrestlers flew in from abroad for this special occasion, including former coaches John Hohenthaner and Jon Rhodes. Certainly, one of the biggest highlights of the evening was the presence of the founding coach, Edward Paradis, who all wrestlers in the 70’s and 80’s were desperate to see again. Titan wrestlers had the eyes of a teenager when talking to their coaches who taught them about life, success, and failure, and changed their lives; turning them into men from boys. Former coaches spoke with their former wrestlers throughout the evening and shared golden stories of the Titans wrestling program.

CLICK HERE for the highlight video of the evening!

“I have never seen anything like this for a sport.”

As the guests checked in, they walked through a historical display of the Titans wrestling accolades. The hallway was filled with yearbooks of the 50 years, old photos, tournament brackets, St. Mary’s letter jackets from 1975 till today, all trophies and plaques of the program, and an in memoriam display of those who passed (Coach Beyer, Coach Bruno, Billy Grossman, Davide Toda, John Hymas, Yusuke Yamaguchi, and John Michael Kwak). As the guests continued to walk into the ballroom, they were greeted with championship banners hanging from the ceiling, blue & gold decorated tables and walls, and, of course, their coaches. The evening was accompanied by live music, a gorgeous buffet, a drink tasting table, raffles, wrestling videos, and a speech relay by the three former coaches and ending with the current head coach and class of 2004, Shu Yabui. But, above everything, the most exciting entertainment for the wrestlers, coaches, wrestling parents, and school faculty & staff was getting to see one another and reliving their memories.

“I was able to catch up with folks I would not have dreamed of.”

As the guests entered the venue, they were mesmerized by the historical displays and the decorations and shouted out each other’s names as they saw their former teammates and coaches. They pointed at the trophies and photos with their teammates and talked about their wrestling days. The evening began with a highlight video of this year’s 50th season and a toast by Tony Cala, former wrestler and the General Manager of the Tokyo American Club. As Tony introduced his teammates that were present at the venue, he asked people to hold their glasses and yelled, not “kanpai” (cheers), but “konjo!” a Japanese phrase meaning “strong spirit”; the phrase often used by Coach Paradis during his coaching days.

“[The event] absolutely blew everyone’s expectations … there will be no other alumni event that will draw this many people.”

The event would not have happened if it were not for the many alumni and families who donated cash and raffle prizes for the success of the evening. Donors were recognized on the 50th commemorative program that were placed on the tables for attendees to take home. The program recapped the programs history by each decade and recognized the many Titan champions and all former coaches’ accomplishments.

“[After the evening] the pride in me to be a Titan forever is stronger than ever.”

All three former coaches were treated with top notch hospitality as they deserve. Their airfare, travel, hotels, and meals were all covered by the donations. The coaches enjoyed their stay at the Tokyo American Club suites. On the night before the event, Coaches Paradis, Hohanthaner, Rhodes, and Yabui all got together for the first time in the history of the program and exchanged coaching philosophies and anecdotes over a special dinner at the steakhouse of the club. All coaches agreed that the magnitude of the event and the number of people that showed up were beyond their expectations.

“[The evening] re-affirmed my belief in the power of wrestling and sport to create life-long positive bonds and bring people together.”

There were many “big name” wrestlers present at the event. Along with St. Mary’s first four-time Far East champion, Chang Young Lee, four of the five three-time Far East champions, Joy Lashley, Jens Larsson, Shu Yabui, and Ryan Vasconcellos, were present. Erik Duus, known as the most successful college wrestler St. Mary’s has produced and the core member of the school’s first Far East championship team of 1982, flew in from California. On top of Jens Larsson who flew in from Sweden, two other Outstanding Far East wresters joined the evening: Eddie Ayala (class of 1997) who flew in from Germany and Ken Nagao (class of 1999 and two-time Far East champion). Many other Far East champions and Kanto champions were also present. The evening was not just for wrestlers, but current school staff and former staff also joined to see their former students and former colleagues. Many wrestlers were also happy to see Peter Hauet (former guidance counselor), Mary Hauet (former English teacher), and Unryu Haku (former business manager), Jeff Nicholson (current teacher), and Fumiko Yamaguchi (current staff) at the celebration.

“[The event] was beyond words. Adjectives do not apply.”

The speech relay of the coaches could not have been better. Coach Paradis, as he sat on a chair for the speech, talked about how he got to St. Mary’s and how the wrestling program started. Then, Coach Hohenthaner continued how he inherited the program from Coach Paradis. He spoke of his decision to move to ASIJ and how great Coach Paradis and Coach Rhodes were as coaches. Coach Rhodes, then, put on a standup comedy show for everyone. He gave hilarious anecdotes on his wrestlers and the days of competing at Far East. Finally, Coach Yabui, wrapped up by expressing his gratitude for the former coaches and how they have set a very high standard for the program. Coach Yabui promised to keep the standards high or even make them higher, and expressed hope that he would be invited to the program’s 100th year anniversary.

“It was a dream-come-true. I was overwhelmed and speechless.”

The evening concluded with the raffle drawings for the prizes that were donated. Attendees won expensive bottles of wine, high-end ear phones, meal vouchers, BBQ grill, trial membership and vouchers at the Tokyo American Club, and more. Current wrestlers worked hard throughout the evening to sell the raffle tickets. Guests were also able to purchase wrestling shirts for a donation as well and many attendees bought them as souvenirs.

“I have had many wonderful experiences when winning a big tournament … but that evening will stick out as the number one in my lifetime… it was probably the greatest feeling I have ever witnessed.”

Throughout the evening, the ballroom was filled with laughter, ovation, and pride. It was a defining moment of what it means to be a Titans “family” and a display of genuine gratitude for the sport of wrestling. There simply was not any other better way to celebrate the grand milestone of the St. Mary’s wrestling program. The evening was extraordinary, unprecedented, and so meaningful; one had to be there to believe it.