It has become a part of the Titans wrestling tradition to host a clinic by Olympians at St. Mary’s. In past years, the program proudly welcomed 1984 Olympic Greco-Roman champion, Atsuji Miyahara, 1964 Tokyo Olympic champion, Yoshikatsu Yoshida, and 2012 London Olympic bronze medalist, Shinichi Yumoto. This year, the guest clinician was notably one of the best hand fighting technician in Japan, Tomohiro Matsunaga who is the Beijing Olympic silver medalist in the 55kg weight class of men’s freestyle wrestling.

Another great opportunity at this clinic is the chance for the wrestlers to practice with “masters” wrestlers from all over Japan. The “masters” is an age division (in the rest of the world, it is referred to as “veterans”) of wrestlers over 35 years old. Masters wrestlers and other high school and young wrestlers were invited to learn from Coach Matsunaga and to practice with Titan wrestlers. Despite their age, they are veterans in the sport and many times their technique was superior to that of the Titan wresters’ youthful energy. 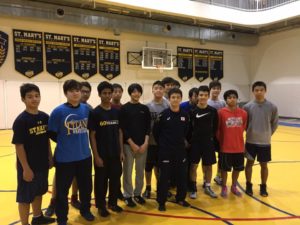 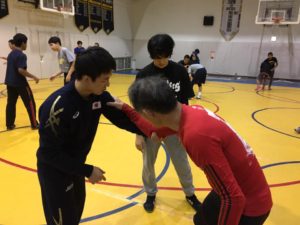 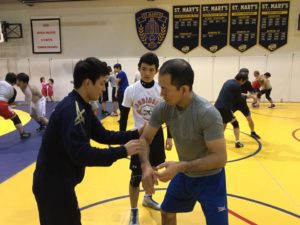 “We, including me, are so fortunate to learn from the best in the world;” commented Coach Yabui, “it’s a once in a life time opportunity for our boys.”  Coach Matsunaga showed many outstanding techniques but one which particularly caught Coach Yabui’s attention was the “short shuck”. From the front headlock situation, the Titans wrestlers have been trained the “head shuck” for years (a move in which makes the opponent go one way, use that momentum to shuck the head to that direction and go around the other direction). However, the effectiveness has been somewhat limited.

The only wrestler to have made the head shuck his main arsenal, is captain, Ryo Osawa. As effective the move is, it seems to be a difficult technique to master. Shucking the head hard and maintaining body balance after the shuck is quite challenging for many wrestlers. Coach Matsunaga taught the wrestlers a quicker, easier, and modified version of the head shuck, which Coach Yabui calls it a “short shuck”. The day after the clinic, the Titan wrestlers began working on this new move taught by the Olympian during practice. This could be a new Titan signature move. 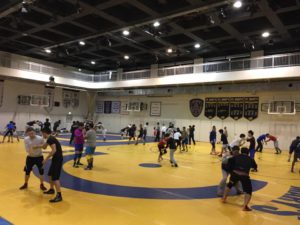 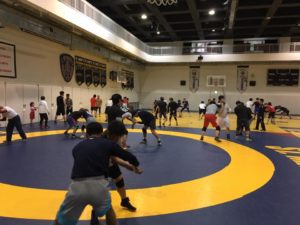 14 Titan wrestlers will compete in a Japanese tournament on December 4. Then, the first league tournament will be at CAJ on December 10. For the first time, this season opening tournament will feature the 3 outlying schools (Misawa, Sasebo, and Iwakuni) on top of the regular Kanto league schools. It should be a good indicator of where the Titans position in terms of the league and what other teams have on their line up. Titans will also host CAJ on January 31, ASIJ on February 7, and the Kanto Plain Championships on February 11. Stay tuned for more wrestling action.