With a number of Titan Wrestling Alumni on hand to watch, the Titans came up short with only 94 points to Kinnick’s 104 points and relinquished their Kanto Championship title to their biggest rival.  It took 9 years for the Titans to bring the title back home when they won it last season so hopefully they don’t fall back into that cycle again! 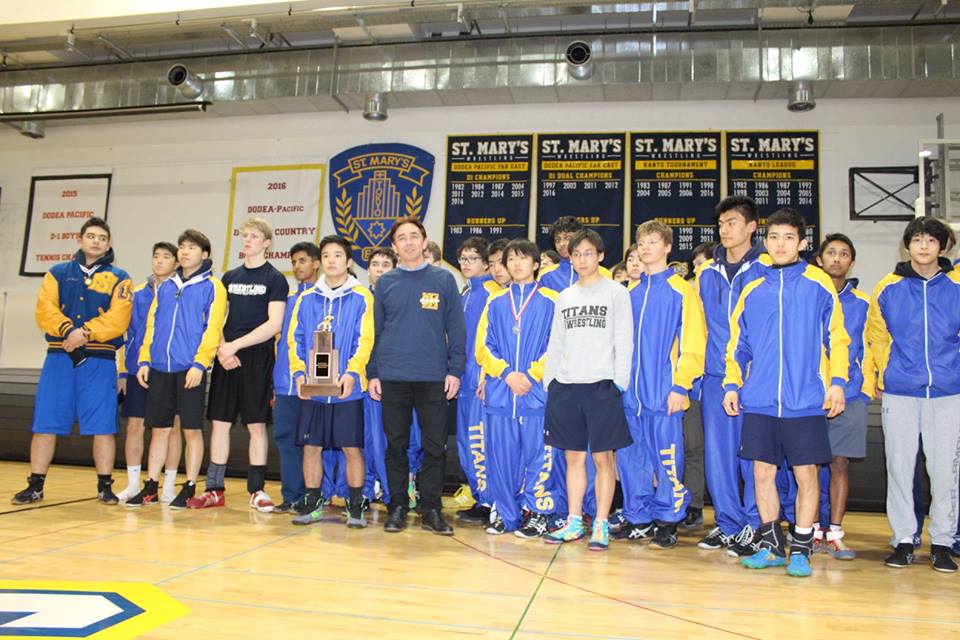 The Titan Grapplers placed 11 of their 12 wrestlers into the finals but were unable to get enough first place wins to keep the title.  Some exciting matches in all of the weight classes with one of the bigger surprises being Mitchell getting upset in the semi-finals of the 168 lb bracket which kept St. Mary’s from having all 12 of the varsity wrestlers in the finals.

101 – Eshan brought home the gold in a competitive final match that may have been a preview of what will see at the Far East in just a couple of days.

108 – Jong Pyeong wrestled strong through the early rounds and came up just short in his bid for gold – again, look for the same match-up this week at Far East in the finals.

115 – Tatsu continued his back-and-forth win/lose cycle with his Kinnick rival coming up short this time.  If the pattern repeats, it should be Tatsu’s turn to win at Far East!

122 – Rio’s match was probably the most exciting of the finals.  He and his Kinnick rival went at it like they were in a street fight and Rio just missed pulling off the win.  This is also likely to be a big battle in the finals at Far East – one that Rio is determined to win!

129 – Tatsuo struggled in the Championship match but showed he had what it takes to make the finals and looks to be peaking at the right time to help the team bring home the far East Championship once again.

135 – Chang Young had little trouble picking up another win and keeping his undefeated season in tact.  The Titan Co-Captain is expected to help lead the team by taking Far East Gold!

141 – Co-Captain Ryo kept his undefeated season going as well and brought home gold.  Regardless of his win and his ability to win through Far East, he’s focused on pushing his team mates to do the same and bring 2 more Far East Banners home!

148 – Jihoon wrestled as he has all season and kept attacking his opponent.  Unfortunately, he wasn’t able to pull out the win in the finals.  He’ll be gunning at his opponents later this week at Far East and has a good chance to make the finals.

158 – Austin was firing on all cylinders taking down his Kinnick rival in the semi-finals but still needs to figure out the key to beating his CAJ opponent to bring home gold from Far East.

168 – Mitchell made one mistake too many in his semi-final match against a Kinnick opponent that he has dominated all season.  He managed to take 3rd place but the results were disappointing.  He’s fired up and has his sight set on Far East Gold.

180 – Alex lost in the finals to his Kinnick rival but his loses continue to be close ones as opposed to his wins which come by fall.  Look for him to take down his opponent when it counts the most – at this week’s Far East Championship!

215 – Shane won a big one in front of the home crowd and  is positioned well to continue his winning ways.  He’s wrestling smart and will be one of the top seeds for his weight class at Far East – the big man needs to continue bringing home the gold to help the Titans retain their Far East Title!

Although they failed to win, Coach Yabui commented that if his wrestlers are going to lose, it’s better they do it here than at Far East.  With his Captains driving the team and making sure that this week’s second place finish pushes the entire team to step it up, the Titans will be bringing it on hard at Far East.  To quote several alumni,”Give them hell at Far East!”

In JV Tournament, the Titans did well and showed the league that “We don’t rebuild, We reload!”