The MS Titans had a “made for tv” ending to their season at home where they hosted the final match of the season.  Showing off the will of the grapplers to want to win, 16 of the wrestlers came home with a medal!  According to Coach Harlow, “This shows the depth of talent we have as a team, and why we do so well in HS.  If we continue building these programs, the future will bring many more banners to the HS team.”  We’re pretty sure Coach Yabui likes what he saw as well since he’ll be graduating 7 of his HS wrestlers this year – 6 of which are varsity. 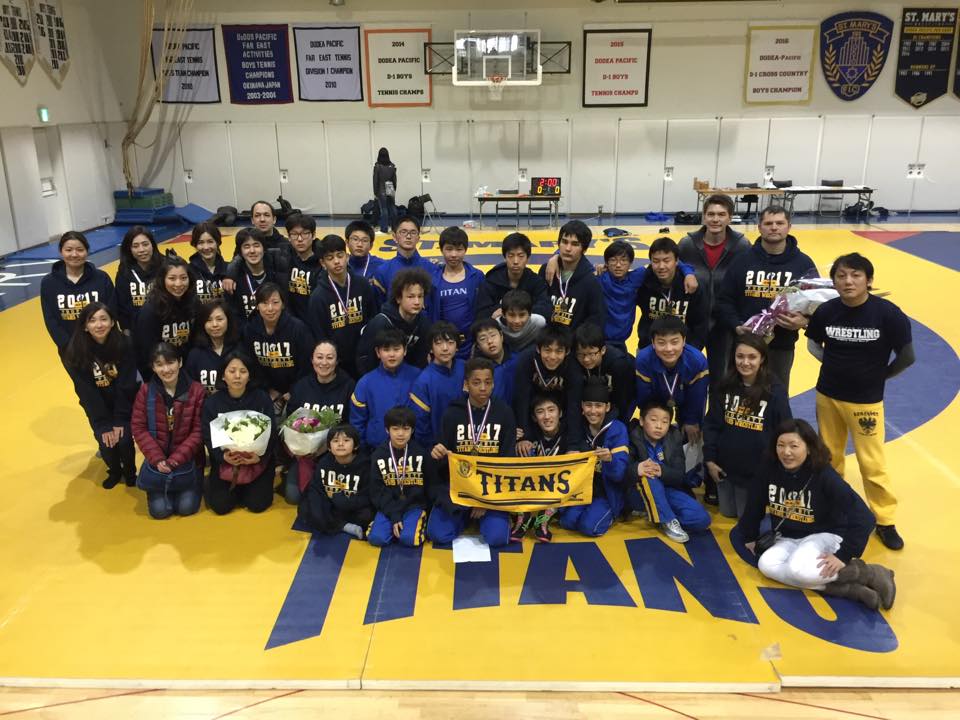 Coach Harlow said,”It will be tough losing our 8th graders but hopefully they continue wrestling in HS and help keep the machine running. These guys will be missed by the MS program, and we will certainly continue to follow them in their future endeavors….once you join our family, we don’t forget you.”  The Titans fielded one of their largest 8th grade groups in many seasons this year including: Eiji Kasahara, Teppei Ono, Taleisin Takei, Yudai Higuchi, Oh Hitomi, Jasjot Bedi, Koya Sugiura, Noah Sandoval and Gi Woong Kim.

This was a talented group that included three undefeated wrestlers: Eiji, Yudai and Talesin and although the HS will be reloading with some very good freshman talent next year, the MS program will be losing a big part of the group that made this season so successful. But at the end of the day, we are St. Mary’s and the program will reload!  Overall, the Titan MS grapplers ended the season with 5 wrestlers going undefeated!  That’s the most the middle school program has ever produced in a single season.  “5 Undefeated wrestlers!!! Is it possible to top that!!??” commented Coach Harlow.

With a number of 6th and 7th grades expected to return next season – Coach Harlow’s words sound like more of a challenge than a question!

Thank you to all the wrestlers who made the commitment to come to practice, work hard, study hard and be part of this year’s winning team!  Thanks to all the parents for supporting your boys, cheering them on at the matches and being part of the Titan Wrestling Family!  A special thanks to Sandy Jones for going above and beyond this year in supporting the MS wrestling program and assisting Coach Harlow with everything throughout the season.

Finally, thank you Coach Harlow!  Your commitment to the MS and the HS wrestlers year after year is priceless.  We all appreciate the fact that you give up time with your family to teach, coach and be part of ours every weekend!