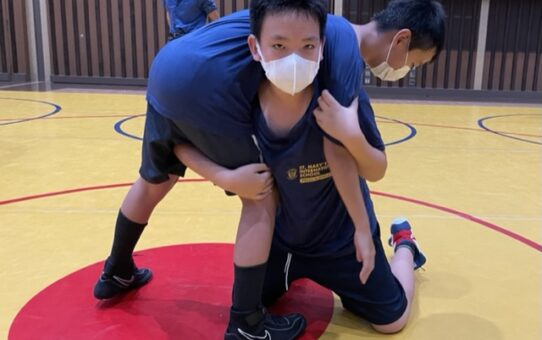 “When former coach, Ian Harlow, left St. Mary’s in 2017, and my son was born that spring of 2018, there just wasn’t anyone to take over the program,” explained Coach Yabui looking back at why the elementary wrestling program couldn’t continue back then. It was a great program run by Coach Harlow where second graders to fifth graders got fun and active exposure to wrestling; a perfect feeder program into the middle school and  then eventually high school. There were many elementary wrestlers from Coach Harlow’s program that continued wrestling further in their careers at St. Mary’s, but the program came to an end in 2017. Current high school team seniors and captains, Isaac Shane and Masaya Toyokawa, are the last cohorts of the elementary wrestling program back then.

“It’s always been on my mind to reinstate the elementary program; it was just a matter of timing,” commented Coach Yabui who is on his 15th year with the Titans wrestling program. The COVID-19 pandemic rendered all athletic activities to halt and the St. Mary’s elementary after school activities were impacted the greatest. Up in the middle school, the entire season was canceled in 2020-21 with only 1 wrestler signing up in the 2021-22 season. The high school team also saw a decline in participation numbers. While other sports were able to have some kind of competition, wrestling was without any competition aside from a few exhibition matches in December of 2021.  Coach Yabui’s initial plan was to bring back elementary wrestling from the 2023-24 season, but given the devastating situation of the once mightiest wrestling program in the Far East, he could not wait another year. “We have to rebuild. It has to be now. It has to start from elementary,” said Coach Yabui about his rationale of reinstating the program this year.

“We have a former St. Mary’s wrestler’s son, sons of parents who were recommended the program by St. Mary’s alumni, and parents signing their kids up because they heard about the program. That says a lot about our school and the wrestling program. We welcome all new families and youths into this great program. I’m proud and excited but also feel great responsibility to pass on the tradition.” – Coach Yabui

As a start, the elementary program was reinstated for third to fifth graders, twice a week with 26 total youths signed up. “Wrestling builds self confidence and discipline. These kids are going to be a part of the ‘wrestling family’ and they are developing tools for the future in any field of career,” commented Assistant Coach Moshe Grimberg, a World Veterans Championship bronze medalist and former Greco-Roman wrestler for the Israeli national team who has experience competing in the European and World championships. This year will mark Coach Moshe’s (as the wrestlers call him) 5th year with the Titans. Originally, the plan was to have him coach the middle school and high school teams in the winter but Coach Yabui decided to ask for his expertise earlier. “I know he’s always going to say yes [to helping coach wrestling] so I was a little reluctant to ask him as he already gives up so much for the high school season,” said Coach Yabui, explaining that as an outside (non-school faculty) coach, Coach Moshe gives up time from his main job to coach with at St. Mary’s. “I will do anything to coach for St. Mary’s! Let me adjust my work schedule and I’ll be there!” was the enthusiastic reply Coach Yabui got. Coach Moshe also has abundant experience coaching youths for the Israeli national program, therefore, his transition from high school wrestlers to elementary wrestlers was a natural one.

A new addition to the coaching staff this year is Coach Tatsuhito Matsumoto, a St. Mary’s graduate who was the captain of the 2018 high school wrestling team. During his competitive career at St. Mary’s, he was a Kanto Plain champion, Beast of the East Champion, and a 3-time silver medalist at the Far East wrestling tournament. He was an integral member of the teams which won back to back double Far East titles in 2016 and 2017. “It will definitely give them the confidence in the future when they become more competitive. It’s great to see the younger generations being enthusiastic about wrestling; it makes me happy,” commented Coach Matsumoto about the program. Along with Coach Moshe and Coach Matsumoto, current senior, Isaac Shane also is helping the young wrestlers.

“I want to give them the guidance and support in anything, not just wrestling. Their improvement as a person and a wrestler means that we, coaches, are doing the right thing.” -Coach Grimberg

Coach Yabui says that the objective of the program is more focused on having fun, learning how the body works, and developing an interest for wrestling. There is very little emphasis on competition other than trying to win a “game” incorporated in a session. “Safety and fun is priority. I am doing what I instruct national coaches to do when developing talent at this age,” explains Coach Yabui, “it’s the global standard the UWW coaching methodology.” Coach Yabui is a certified UWW (United World Wrestling, the international governing body for wrestling) Coach Educator and he has been involved in coaching and developing national coaches for countries through the UWW Coach Courses. “At this age, wrestlers need to experiment their skills through a ‘games approach’ and be guided in a safe and fun manner; we call it ‘FUN’damentals,” added Coach Yabui. “They are excited and sometimes silly and goofy, which is important at this age,” also commented Coach Moshe.

As much as the program would like to gradually develop fundamentals, given only 17 sessions in a season each about 45 minutes long, the pace of the sessions are fast. From the first day, the wrestlers learned the high crotch and fireman’s carry takedowns and are already transitioning into short offense (go behind takedowns) and defensive techniques. For middle school and high school, more time would be spent on the basics, but with the elementary program, the basics and higher level techniques are learned simultaneously. A typical session would begin with warm ups, a variety of tag games (that involve wrestling motions), technique, and games based drills.

“I want to pass on the knowledge I have and hopefully they [the elementary wrestlers] will do the same in the future.” – Coach Matsumoto

The program has already had great reviews from parents saying their kids had fun and even want to do some wrestling at home. It would not be surprising if some of these elementary students in the program now become Far East champions in the distant future. Will this program be the spark to rebuild the high school wrestling team which had once accomplished to becoming the most dominant team of the former decade? The answer will not be revealed for another several years, but given the absence of wrestling at St. Mary’s due to the pandemic, it seems that it is a big step moving forward. As Coach Yabui says, the most important thing at this point is for the wrestlers to have fun.